Hard Clue Scroll is a valuable item dropped by high-level mobs around Gielinor. The steps to complete a Clue Scroll (Hard) can vary from 4 to 6 steps. Being a part of the Treasure Trails, you’ll need to run around from places to places, while solving various clues. The rewards obtained in the end are items randomly chosen from the rewards list mentioned below in this article. The rewards can be anything between basic OSRS items to very rare 3rd age and gilded items, depending on how lucky you are. They’re usually long and complex to solve because of the puzzle boxes that they include, and can also involve fighting various mobs like a Saradomin / Zamorak Wizard, or a Double Agent.

Players often prefer solving Easy and Medium Clue Scrolls due to the risk that Clue Scroll (Hard) holds, as well as its quest requirements. Apart from all the clue scrolls tiers in-game, Hard Clue Scroll is the only item that can be held one at a time. In other words, you can’t have more than one, and to pick another, you must first solve the one you picked or drop it. Another thing to remember is if you complete a few steps of a Clue Scroll (Hard) and drop it to pick another, then your steps will completely reset, resulting in a do-over.

Completing 300 Clue Scroll (Hard) will unlock the Transform emote, and upon completing it, you’ll receive a Casket (Hard) as a reward, which can be opened to obtain various rare items. Handing a Hard Clue Scroll, along with Easy, Medium and Elite to Watson will result in receiving a Master Clue Scroll.

Keep in mind that if you die with a Clue Scroll above level 20 Wilderness, then it will disappear (Either it is a PVP death or death by a monster), unless the item is kept on death, or if you have a Clue Box with you. Upon returning to the location where you died, you’ll notice that the Clue Scroll has disappeared, but if you’re dead with a Clue Box in your inventory and you return soon enough, then the clue will remain in your inventory, while the Clue Box resulting in being lost. However, if you die below level 20 Wilderness, then the clue scroll will remain on the ground for an hour until it disappears or you pick it up, and the same goes for the reward caskets that you obtain after solving the clue. If you end up dead by a Wilderness NPC below level 20, then even if you’ve protected the item or not, it’ll remain in your inventory. 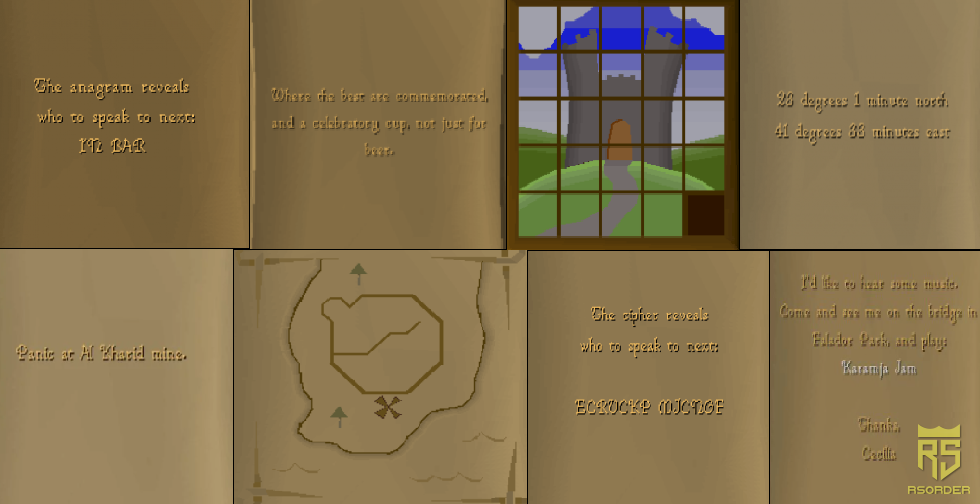 There are nine types of clues that you can get while solving a Clue Scroll (Hard). These clues include; Anagrams, which are strings of letters that can be rearranged to form a different phrase or word. Challenge Scrolls, where you have to first find the right NPC, speak to him, and then solve his riddle to clear the step. Puzzle Boxes, where you’ll be provided with a scrambled, and you have to move the tiles to form the right image. Coordinates, where you have to find the location of the next clue with the help of the coordinates (Example, 01 Degrees 24 Minutes North, 08 Degrees 05 Minutes West). Cryptic Clues, where you have to complete different tasks like speaking to an NPC, digging at a given location, or searching creates. Emote Clues, where you may have to equip certain equipment’s, travel to a designated area and perform an emote to summon the NPC named Uri for the next clue. Maps, where you have to find the location that is drawn on the clue and dig at the area where the ‘X’ is marked. Cyphers, where you have to encrypt different codes using a Caesar Shift to find a specific NPC’s name, and finally, Music, where you’ll be tasked to play a specific song by standing on the bridge, next to the NPC Cecilia, located in the Falador Park.

Clue Scroll includes requirements where you have to wield a specific item or access an area, and this can only be done if you have the required skill set. For Clue Scroll (Hard), you’ll need 60 Prayer to wield Stoles & Croziers, 50 Ranged to equip Blue Dragon Hide armour, 66 Magic to start the quest Swan Song and gain access into the Piscatoris Fishing Colony, 40 Attack to wield Rune weapons, as well as a Mystic Fire Staff, 20 Strength to wield a Rune Halberd, 40 Defence to equip Rune armour pieces, as well as a Blue Dragon Hide Body, 68 Fishing to gain access into the Fishing Guild, and 56 Agility to pass through the Dense Forest located in Tirannwn.

Ironman concerns are different and have more skill requirements as compared to normal accounts. For an Ironman to solve a Clue Scroll (Hard), you’ll need 80 Slayer to obtain Rune Boots as a drop, 58 Crafting to craft a Diamond Bracelet, 68 Crafting or 50 Hunter to obtain Blue Dragon Hide Chaps, 89 Hunter or 80 Crafting and 68 Magic to obtain an Amulet of Glory, and completion of the quest ‘The Lost Tribe’ to gain access to a Bone Spear. 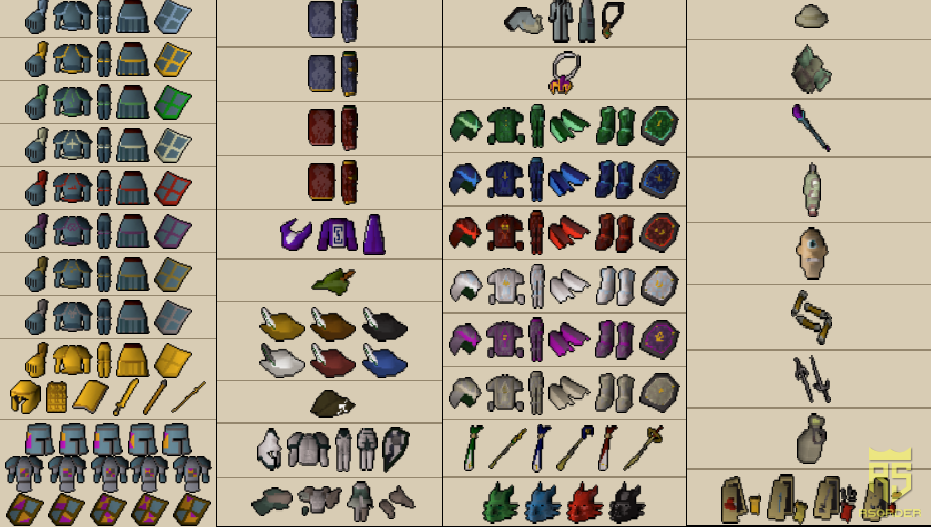 The average amount that can be earned from a Hard Casket is worth around 30,934 OSRS Gold Coins, and if you are willing to sell a Hard Clue Scroll, it’ll go for around 154,673 Gold Coins. So, that way you can earn money both ways, either by solving it for a chance to obtain a rare reward or by selling it off to another player. Apart from the rewards listed below, which are of the rare category, there are also basic rewards that can be obtained from the casket.