​OSRS Land of the Goblins Guide

Popularly known to be a part of the Dorgeshuun quest series, Land of the Goblins is where you and Zanik follow Grubfoot’s request to locate Yu’biusk, which is the homeland of the Goblin race.

● Another Slice of H.A.M 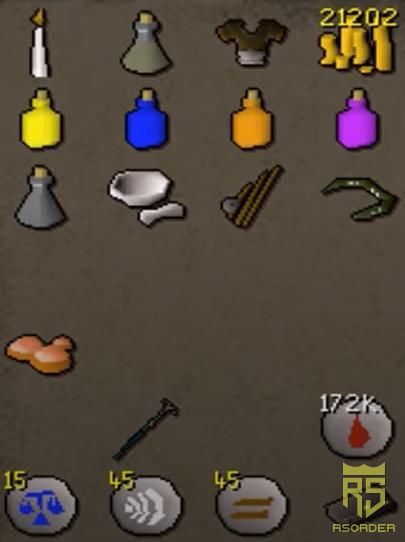 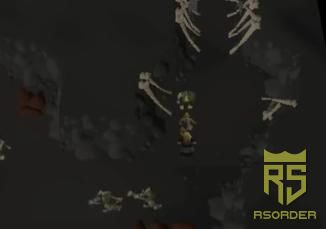 You need to make your way to the entrance of Dorgesh-Kaan, which is located at the Dorgeshuun Mines. This is where you’ll find Grubfoot so speak to him. He’ll want to speak to Zanik, but Mistag states that even though the council has allowed the entry of humans into the capital city, the entry for Goblins is banned. 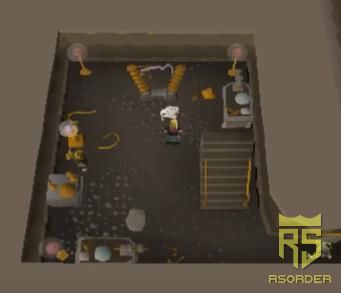 Tell Mistag that you’ll take responsibility for Grubfoot, and then take him to Zanik, who is located in the north-western corner of the capital city (Oldak’s Workshop). Grubfoot will tell you and Zanik about his dream of Yu’biusk, also known as the Land of the Goblins.

He’ll also mention a hidden temple of the Big High War God, and that the priests there may know how to reach Yu’biusk. After that, he’ll give you the location of the temple, which is a muddy cave near a ‘place where many humans catch fish.’ 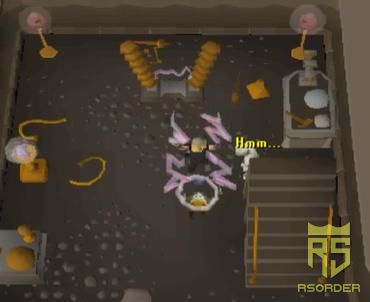 Sounds confusing but Oldak will recognize that Grubfoot is referring to the Goblin Cave. He’ll then use a teleportation sphere to take you and Zanik to the location. 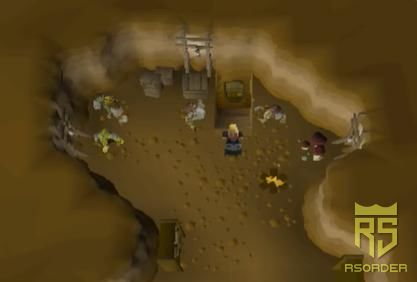 Once you arrive, head northwest until you see the temple’s entrance. The entrance is guarded by two Goblin Guards, and they’ll only allow Zanik through because she’s of a similar race. 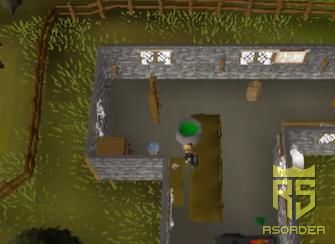 Return back to Oldak and inform him about the current situation. He’ll ask you to visit the Makeover Mage, which is located north of the Crafting Guild. You need to ask him to turn you into a Goblin; however, he’ll deny and instead tell you the recipe to create a Goblin Potion. 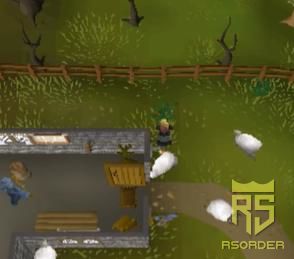 You’ll need Pharmakos Berries from the bushes outside the building and Toadflax. He’ll also tell you about the restrictions that need to adhere to while making the potions. For instance, you can’t stand in direct sunlight, enter a combat scenario, or wear any item that’s not a Goblin Mail. 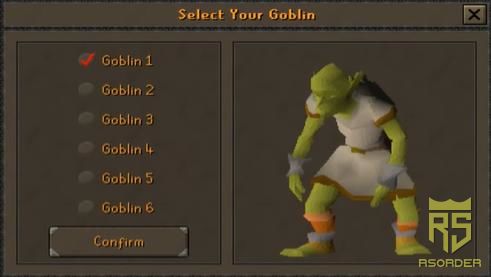 Once you have made the Goblin Potion, head back to the Goblin Cave and drink it to turn into a Goblin. Speak to the Guards again, and they’ll try to guess your name. You can choose a name by saying that they’ve guessed it correctly, or you can ask them to guess again if you don’t like it. 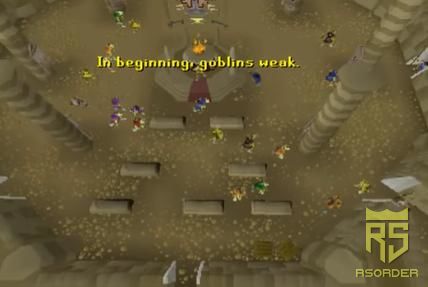 If you don’t already have Goblin Mail, you can search the crates upon entering to obtain one. You need to now speak to High Priest Bighead, who will bring it to your notice that Zanik has been imprisoned by the Huzamogaarb Tribe. 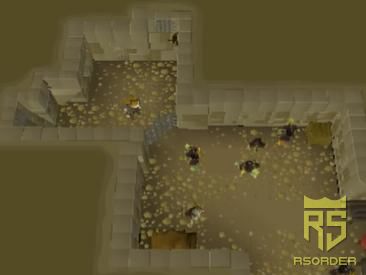 Now, use Black Dye on the Goblin Mail to make Black Goblin Mail, and then wear it to enter the Huzamogaarb Tribal room (north-eastern part of the temple). Speak to Zanik there, who will tell you how her Sphere was confiscated. 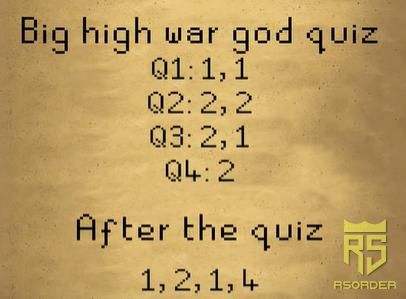 Search the crates across the room to find the Sphere, and then return it to Zanik so that she can escape. Return back to the High Priest and speak to him about Yu’biusk to know that the land is not for ordinary Goblins.

● Those who do not believe in Big High War God, whether they goblins or other races, must die. The answer is ‘True’ and ‘Big High War God commands it.’

● Goblin leaders should be good at planning in order to win battles. ‘False’ and ‘That one of the commandments.’ 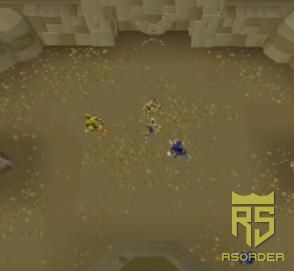 Once you pass the test, the High Priest will start answering your questions. Ask him about Yu’biusk and its whereabouts. He’ll tell you that his predecessor Snothhead might know, but he’s buried in the temple crypt. 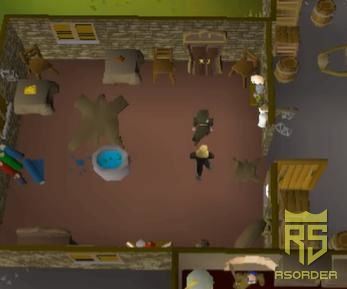 Now, you need to dye your Goblin Mail to match the color of each of the remaining five tribes. For the White Dye, you need to visit Aggie in Draynor Village and ask her about it. She’ll require 5 OSRS GP and a Whitefish, which can be caught at Hemenster with a Raw Slimy Eel (Bait). 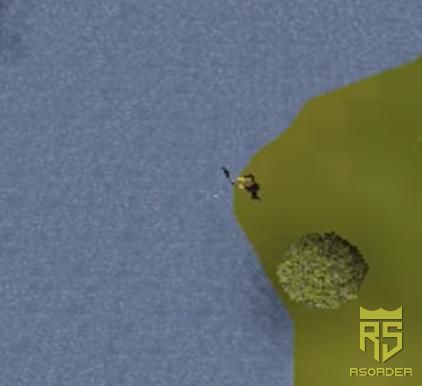 Head to the Fishing Contest, west of the Ranging Guild, and then speak to Morris and tell him that you want to catch a Whitefish. Once you have it, go back to Aggie so she can make the Dye for you. 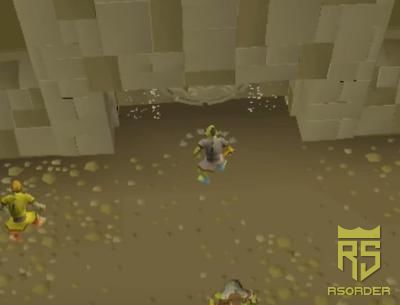 Once you have the six eyes from each tribe, open the big door to enter the Crypt. It’s time to get ready for battle so equip your equipment and weapon. 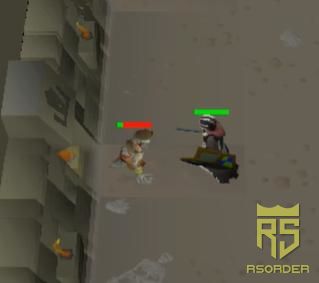 Go to the first grave that is to the left and say Snothead to bring him back from the dead. Defeat him and ask about Yu’biusk’s whereabout. He’ll tell you that his ancestors know about it. 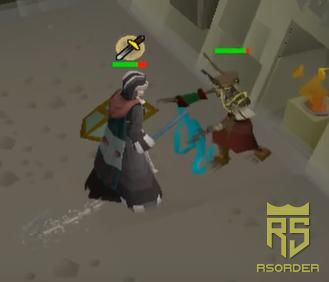 Continue the same pattern until you have defeated four other High Priests (Snailfeet, Mosschin, Redeyes, and Strongbones). Upon defeating Strongbones, he’ll tell you that Yu’biusk is not a place on Gielinor, but another plane of existence.

Head back to Oldak’s Workshop and inform them about everything that you had learned. Oldak will tell you about a Fungus Ring that they had found in the Southern Caves, and that it might be able to open a portal to Yu’biusk.

Travel south from where you currently stand, head up the end staircase, and then up again to reach the Agility Course. Take the western ladder down, continue south, and then exit from the first eastern corridor. 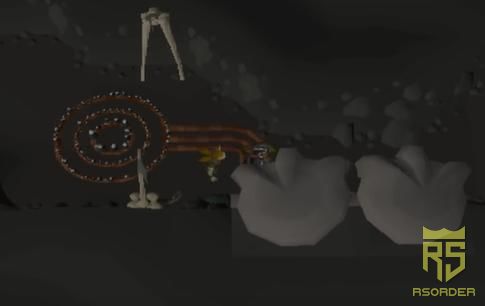 Touch the end of the corridor, continue south again, and then look for a ‘Transportation’ icon to your west. Speak with Zanik and Oldak there, who’ll now ask you to adjust the machine. 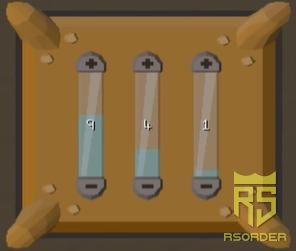 You can do that by allotting power to each circle. You need to enter the values 9, 4, and 1 to activate the machine. A cut scene will trigger where the three of you are teleported to Yu’biusk. 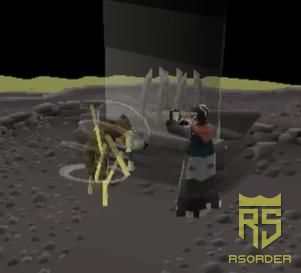 You’ll notice that it’s a wasteland that was torn apart by Bandos during the God Wars. Head northwest to find a Strange Box. When you open the box, Zanik will get sucked into it, which is your queue to return to Gielinor as the portal is closing. Finally, go through the conversation with Oldak and the quest will be completed.

RSorder's OSRS Land of the Goblins Guide hopes it's useful to you! We sincerely believe we are the best in our business, so why not place an order with us today to buy cheap OSRS Gold and let RSorder help you make the most of your RS life!