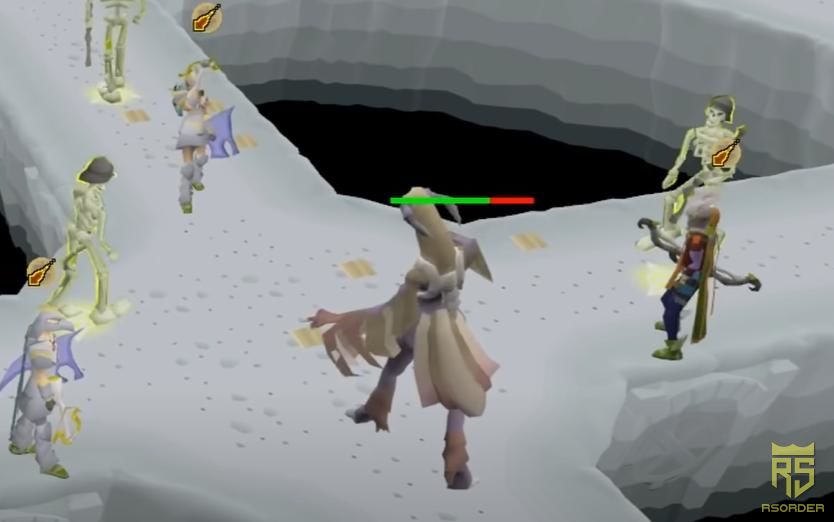 Nex is popular among the player of OSRS as one of the most powerful bosses in the game. It’s always recommended that you approach her with a team because defeating her can be a tedious task. 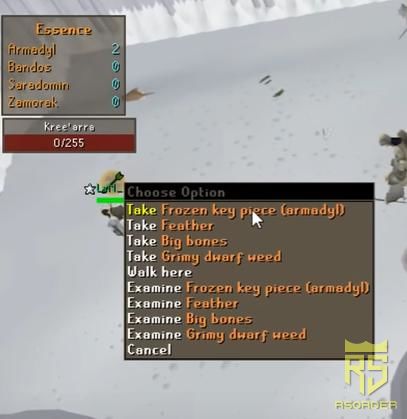 You can only access the Ancient Prison after completing The Frozen Door mini-quest. The quest requires you to assemble the Frozen Key, which has four different pieces that are obtained from the four generals of the GWD (God Wars Dungeon).

You need at least 70 Strength, Agility, Hit Points and Ranged to obtain the key. While the drop rate on the general’s bodyguards is at 1/20, the generals themselves offer a guaranteed drop rate. The Frozen Door is permanently unlocked once the Frozen Key has been used on it. 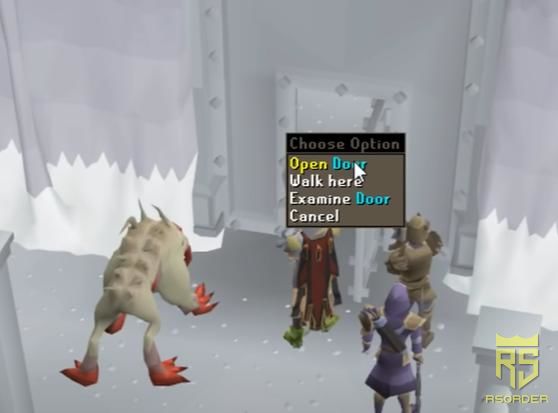 You need to run past a mob of monsters to get access to the safe room that lies between Nex’s chamber and the main area. That’s why it’s recommended that you equip a Zaros-related item to make the Blood Reavers and Spiritual Fighters unaggressive towards you.

You need to have 40 Ancient Essences to enter the safe room, and these essences can be gained by killing Spiritual Warriors, Spiritual Rangers, Nex’s Bodyguards, Spiritual Mages, Blood Reavers, and Nex herself. You can bypass the requirement by using an Ecumenical Key or at least lessen the essence count by completing various Combat Achievements. 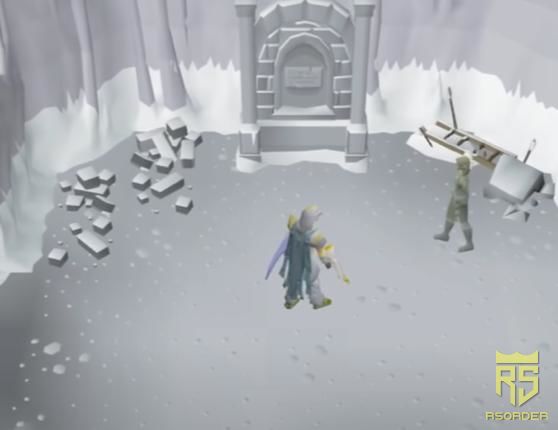 The Safe Room is an area where a nature spirit named Ashuelot Reis grants you the ability to access banking services. It allows you to properly prepare before approaching the boss. Once the team is ready, you can walk past the Ancient Barrier to begin the fight.

It’s recommended that you have at least 80 to 120 kills before entering the Safe Room. It’s because the reserved kill counts can be utilized to re-enter the room in case you teleport out due to lack of supplies.

Nex has a total of five phases: Smoke, Shadow, Blood, Ice, and the Zaros phase. In each corner of the room, there are four level-285 mages called Umbra, Cruor, Glacies, and Fumus. They represent the four different elements of the ancient spells that Nex uses.

Even though Nex possesses low combat stats and defensive bonuses, you cannot underestimate her because she has high health. She may be weakest to the Stab attack style, but you still need Ranged for the Shadow and Zaros phases, as well as to kill her bodyguards. 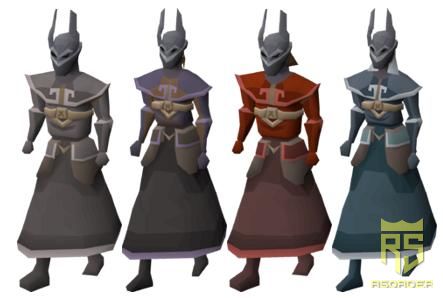 The guards have a high defense with varying bonuses. Three of them are weak to melee than ranged, but still, it is recommended that you bring along both Melee and Ranged attack style setups for a smoother experience.

With a range of 10, Nex uses the ancient spells of the same type as the ‘mage’ of the ongoing phase. She also has a melee attack that can hit the enemies who are in close range (hits up to 30). If she is unable to hit a player for a while, she’ll end up flying to another tile and resume the fight. 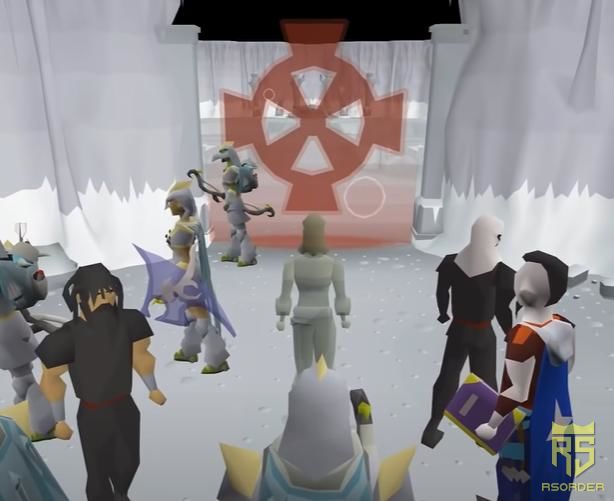 Her chamber can only be accessed when there’s no one fighting her, or if the chamber is glowing in purple color. If someone is already fighting her, then the chamber will glow in red and remain the same until the fight is over. 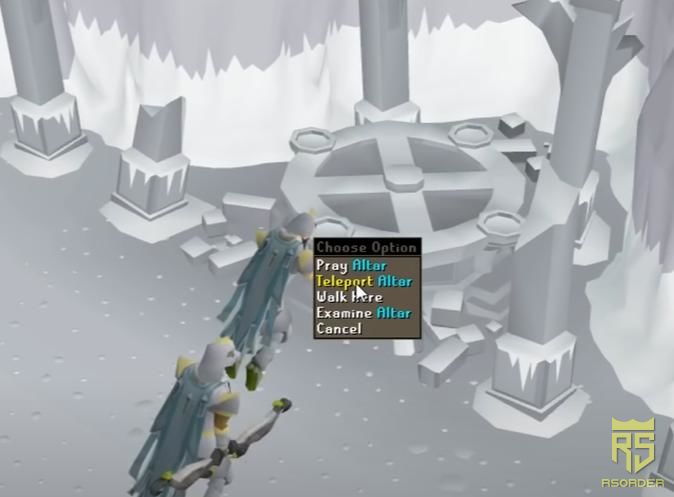 You can use the Altar across the room to teleport out of the chamber. It’s worth noting that if you pray at the altar with a Zarosian item on you, it will restore your Special attack, Prayer Points, Hit Points, and Run Energy (once every 10 minutes). 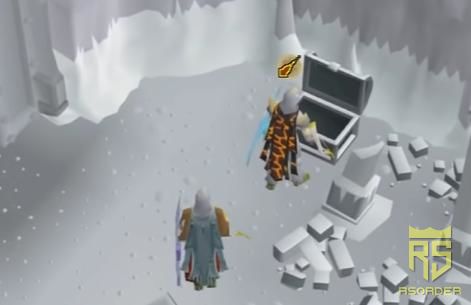 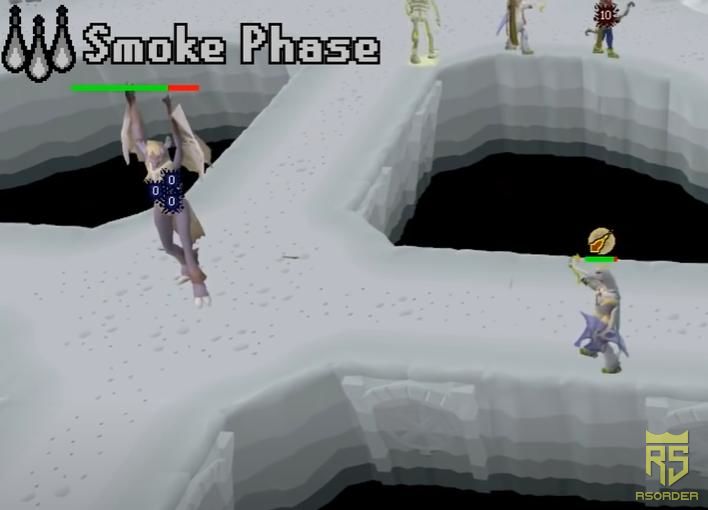 The first phase while fighting Nex is the Smoke Phase, where she will use the Smoke Rush spell against the players. The spell can easily poison you, so you need to be careful. It’s also the only phase where her spells won’t drain your prayer.

Choke targets the players with the least amount of Magic Defence bonus. It infects the player and drains two Prayer Points every two ticks. It also drains the stats based on which player has the highest Attack bonus. You need to watch out for the attack because it spreads between adjacent players, and resets the duration on the infected one.

As the name suggests, ‘Drag’ attacks will drag a random player towards her. It stuns the players and deactivates their protection prayer. Finally, Smoke Dash darts down one of the four aisles in the chamber to deal up to 50 damage. She’ll first look towards the direction that she intends to fly. 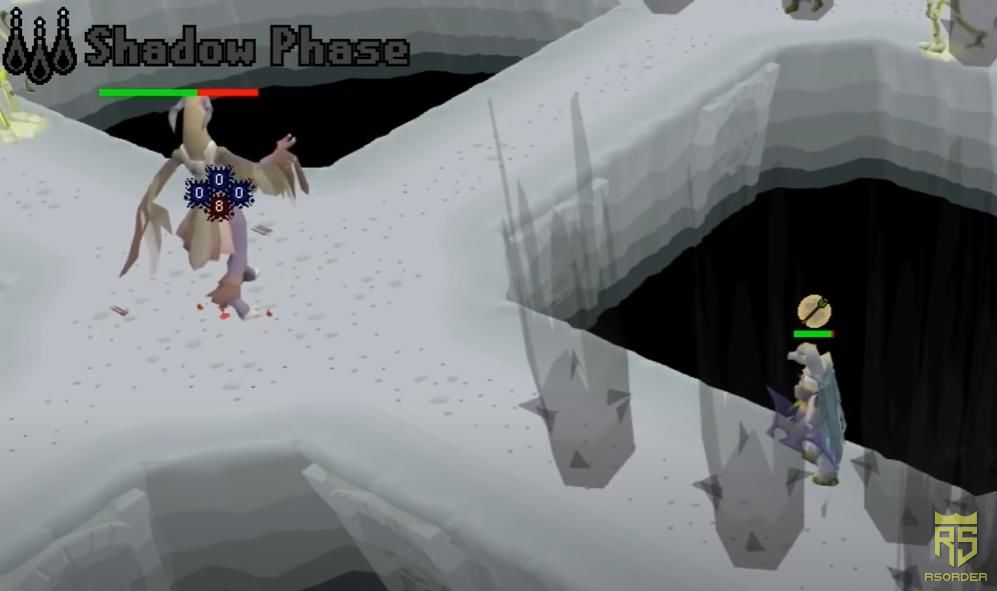 The second phase is Shadow Phase, where Nex will begin shooting Shadow Shots. Since they are Ranged-based attacks, you need to have Protect from Missiles active to cut down the incoming damage. If the hits are successful, then the Shadow Shots will drain your Prayer Points. It is advised to keep your distance during this phase.

Shadow Smash triggers deadly shadows under every player, and you’ll have three ticks to move away from your shadows or you’ll deal up to 50 damage. Embrace Darkness will darken the chamber. In other words, the closer you are to the boss, the darker the chamber will get. You need to remain outside of Nex’s melee range to avoid being constantly damaged from the pure shadow. 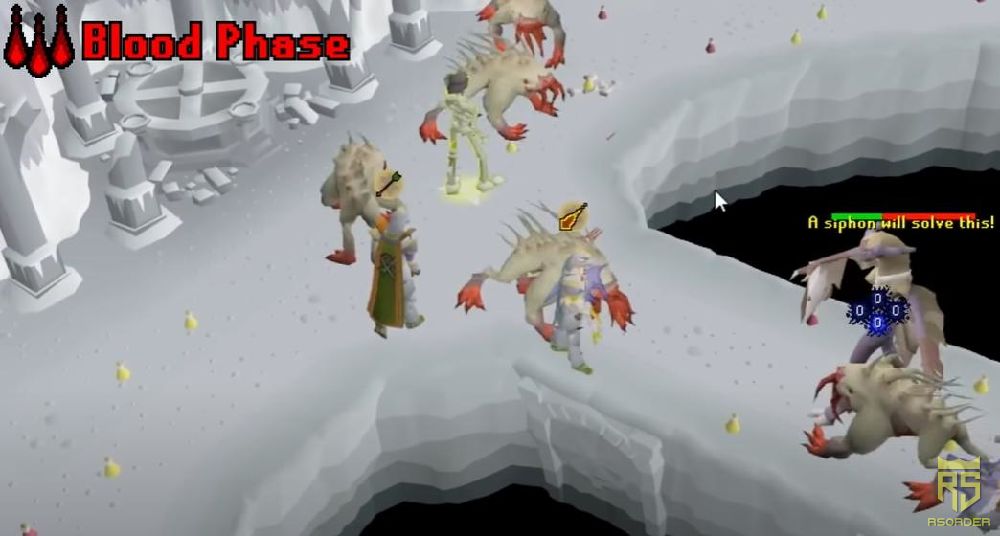 The third phase is the Blood phase, where Nex will begin using Blood Barrage against her enemies. These attacks will heal her health by a percentage of the damage dealt. It will also drain your prayer based on the damage inflicted, which can be reduced by equipping a Spectral Spirit Shield. You need to move away from the other players to reduce the overall damage, as well as Nex’s healing.

Blood Siphon summons eight Blood Reavers, making her kneel for about eight ticks. Don’t attack her during this attack because the damage will instead heal her. Blood Sacrifice marks a single player with glowing red color. The marked player will have about four seconds to move seven tiles away, or the attack will deal up to 50 damage (even with protection prayers) and heal her. It also drains 1/3rd of the player’s prayer points.

Note: Even the other prayers (non-marked) will deal up to 12 damage and have 1/3rd of their prayer points drained.

The fourth phase is Ice Phase, where Nex will start casting Ice Barrage upon her enemies. If you’re not praying Protect from Magic, you’ll be frozen by the attacks. Your prayer points will also be drained by 50% of the damage she deals. You can reduce it to 1/3rd by using a Spectral Spirit Shield. Similar to the Smoke and Zaros phases, you need to stand in melee distance of the boss.

During Containment, Nex smashes the floor and causes icicles to fall in a 5x5 area around her. If you get caught, you’ll deal up to 60 damage, and your prayer will be deactivated. Don’t stand near Glacies because there’s a possibility that its special attack will freeze you in place, causing Nex to glide over to the corner and use Containment.

Ice Prison spawns Stalagmites within a 3x3 AOE on the targeted player. It also deactivates their protection prayers. Players who are near the formation will be shoved aside for 0 damage, but players at the same time will be imprisoned. The prison will shatter after four seconds, dealing up to 75 damage to anyone inside. You can destroy the Stalagmites using Crush-based attacks, which are known to be more effective. 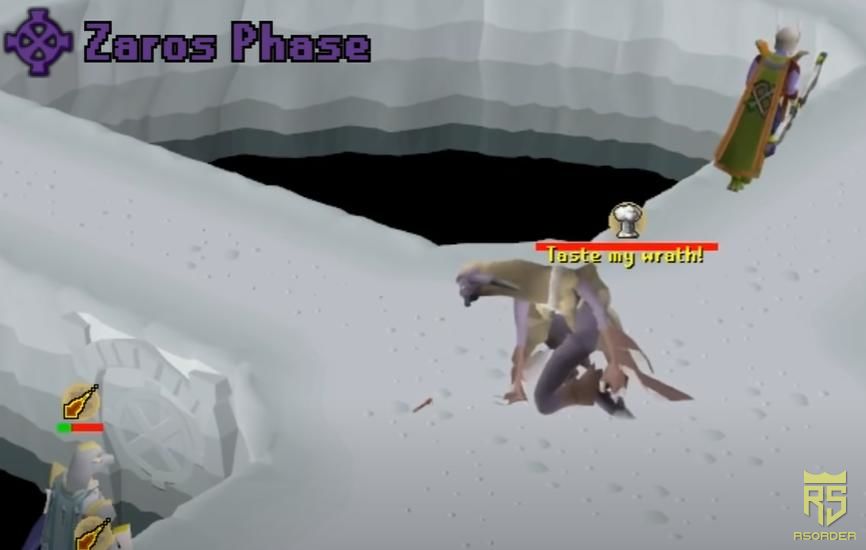 The final phase is the Zaros phase, where Nex calls upon the true power of Zaros. She’ll heal herself with 500 HP, and will only use normal Magic and Melee attacks. Be careful because her Magic attacks drain five Prayer points if they successfully hit, but then again, you can reduce it by wielding a Spectral Spirit Shield. Similar to the Smoke and Ice phases, you need to stay in the melee range to avoid additional damage.

Turmoil will last until the end of the battle, where her Magic and Melee attacks will be more powerful due to increased accuracy. Soul Split will cause Nex to heal a small percentage of health every time she successfully lands a hit on three players.

Deflect Melee is another variant of Protect from Melee, which will deflect the damage from melee attacks. Finally, Wrath is a stronger variant of Retribution, which deals up to 40 damage to players within a 5x5 radius after her death. You’ll have only three seconds to move away from her after she’s defeated. 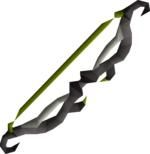 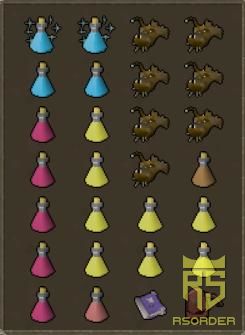 This is a basic inventory setup while approaching Nex in a large team. You’ll need Anglerfishes, alongside Saradomin Brews and Super Restores at an adjustable ratio. If you’re utilizing a ‘Crossbow Setup,’ then you’ll need either a Twisted Bow or Toxic Blowpipe to hit Cruor, Glacies, Umbra, Fumus, and the Blood Reavers.

At least two of your team members need to bring a Crush weapon to free the prisoned allies (Ice Prison). If you don’t have a Crush melee weapon on you, you can unequip your current weapon and Crush attack the prison unarmed.

If you want to increase the overall damage per second, you can summon Thralls to help you through the battle. Greater tier Thralls require Fire, Cosmic, and Blood Runes to summon, so you’ll need a Rune Pouch too. Even though you don’t want to summon a Thrall, it’s recommended to bring a Rune Pouch to pick the Rune drops after Nex’s defeat.

Hope this article on OSRS Nex Guide was helpful to you! RSorder To help you get your RS Gold quickly and smoothly, we are doing our best to help you enjoy the game. Thanks again for your support of RSorder and have fun!