The villagers of Nardah are in a big problem. The well in their town has dried up and the water they try to bring back from the town mysteriously disappears. It seems that their village has been cursed and they are in need to help to uncover the mystery that has befallen them. 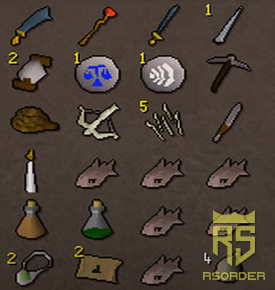 ● Desert clothing to protect yourself from the heat

● Waterskins to avoid damage from the heat

● Spear / Hasta to use all three attack styles

Enough of a combat level to defeat a Black, Grey and White Golem (Level 75)

To start the quest, speak to Awusah the Mayor in Nardah and he tells you about the conflicts occurring in his town. From there, head north of the mayor’s house and talk to Ghastor the Elder, who will give you a ballad. Do not drop or bank this item as it is an essential item needed to complete the quest. Now, go west from where you stand and speak to the NPC named Shiratti the Custodian. Once you’re done talking, go to the west section of the building, search the cupboards and use your needle & thread on the torn robes. Before you do so, remember to grab both top and bottom. In the end, you’ll obtain Robes of Elidinis, so now all you have to do is cast a telekinetic grab on the ancestral key in the enclosed area to steal it. 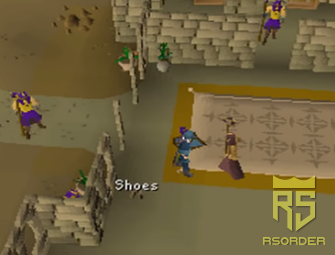 Next, head to the waterfall on the east bank of the River Elid. To get there you can simply leave Nadah, walk north-west till you reach the banks of the river and then turn towards the north until you see a waterfall. On your way, you will find a bronze pickaxe, bronze arrows and a short bow, so pick them up if you haven’t brought any along with you. Another way is by passing through the Shantay Pass, into the desert and then heading south-east till you see a bridge. Cross the bridge and then follow the path north to reach the entrance.

Once you’ve reached the entrance of the dungeon, use a rope on the root above the waterfall to enter and then open the door using the ancestral key, while wearing the Robes of Elidinis. Now, head east, while ignoring the door to the north to find three other doors. Opening each door will spawn a level 75 golem, who will have to be killed using one of the three attack styles. In any case, if you’ve forgotten to bring an all three-attack style weapon, you can use your pickaxe that you had picked on the path to the waterfall. After you’ve defeated them, enter the room to solve a puzzle that will clear the water channel. 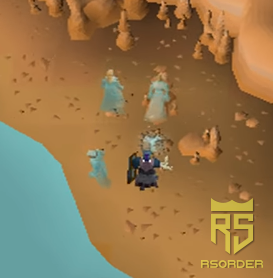 Once you’ve cleared all the three channels, head north through and you’ll find the remaining door. Enter it and talk to the spirits Tirrie, Nirrie, and Hallak, who’ll ask you to recover a sacred statue named “Statue of Elidinis”. So, go back to Nardah and speak to the mayor to know that the statue has been thrown down a crevice located west of the town. Before you leave, pick the mayor’s shoes beside the door and use a knife on it to remove its sole. Now, you have to go west from Nardah’s general store until you reach the crevice, then use a rope on it. Do remember to bring a light source or you’ll end up being eaten by tiny bugs. You will find a genie there, talk to him and he will return you the statue in exchange for the mayor’s sole. Give it to him, retrieve the statue, go to the town's shrine and place it there to complete the OSRS quest. 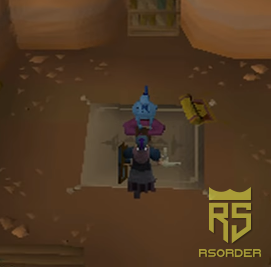 ● Access to the shrine and fountain area of Nardah: