The following guide will give you an overview of the current staking system in OSRS. The information is entirely up-to-date (Dec 2021). 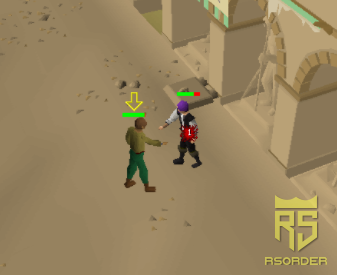 Staking is usually done with Abyssal Whips, but players occasionally opt to use Dragon Daggers because of their special attacks. The actual staking doesn’t allow players to consume any food items, prayer potions, or wear any equipment for an advantage.

Duel Arena Staking is one of the best experiences offered to players in OSRS. It’s probably the most convenient method to earn a lot of gold quickly. Several players work hard and grind their days to earn money, but smart players approach the Duel Arena to test their luck and earn the highest stack of OSRS gold.

Aiming for a huge stack of gold is a lot more complicated than it looks because the strategy entirely depends on the player’s luck. Many players don’t approach the arena because they can’t withstand the loss, while other players do it for the thrill as it makes the gameplay more intriguing.

The best advice would be to refrain from doubling up or increasing your bets when you know that you’re on a losing streak. Yes, you might feel that after nine losses, the tenth one will be in your favour. But you’re wrong, because the staking has a 50/50 chance, and it always has been that way. Gamblers will try to pull you in by saying that the more you lose, the better chances there are to win later. Don’t believe that.

Don’t bet an amount that you can’t forget or may regret losing. If you’re planning to double up the stake and your budget is awfully low, then the wisest choice would be to step away. It’s always better to keep a little money than to get cleaned entirely.

What is Duel Arena? 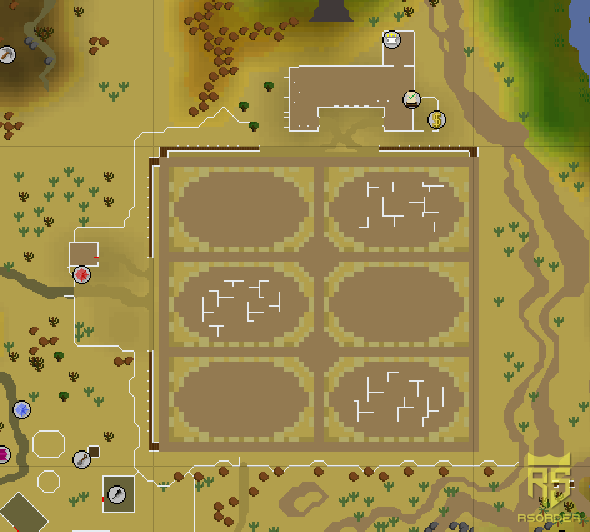 It’s an arena located in Al-Kharid. If you wish to visit it, then simply pass the Lumbridge toll gate and stick to the western path. Also, you’ll need 10 gold coins to pass the gate, which is if you haven’t completed the quest ‘Prince Ali Rescue.’ If you have completed it, you can pass through without paying a single penny.

Alternatively, you can reach the Duel Arena by passing through Varrock. There is basically a gap in the fence south of Varrock, and you can enter into the desert from there.

What are the rules of Duel Arena?

Duel Arena is a safe zone where players don’t lose any items if they die, apart from what they’ve staked against the opposing player. You basically spawn at the nearby hospital when you end up dead.

You’ll come across an NPC named Mubariz when you stroll around the location. He’ll tell you everything there is to know about the place. 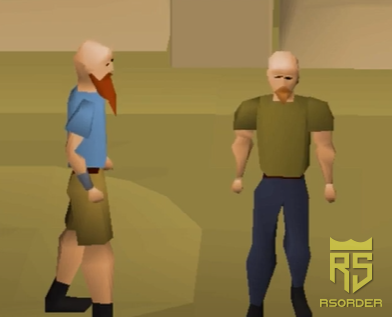 You can battle by challenging a fellow gamer within the area. This can be done by right-clicking the player and pressing on ‘Challenge.’ Once the other party accepts, you can begin the fight. It’s worth noting that the arena requires no quests, equipment, or combat level to participate. You can start staking as soon as you leave the Tutorial Island. 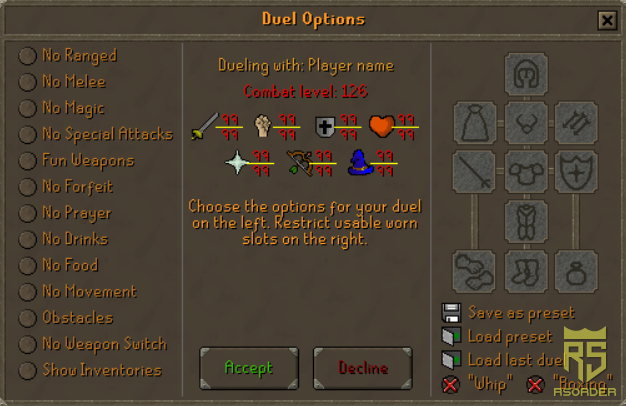 You can even customize the rules as there’s an interface that opens right before the battle begins. Only once the rule is set, and both the parties accept, the fight will begin.

Yes, because it can marginally improve your odds of winning. It makes a huge impact if you do several stakes. You may think that attack styles are useless and that it is only useful for skill experiences, but you’re wrong because they offer invisible stat bonuses.

Deflect offers +3 Defence, Lash offers +1 Attack, +1 Strength, and +1 Defence, and Flick offers +3 Attack, making it incredibly accurate. The strength bonus offered by the Lash attack style is kind of meaningless because strength only increases the max hit of a player to a limit. In simpler words, it isn’t useful if you’re already at 99 Strength.

When you’re duelling against a player, and you’re about to attack, you can switch to Flick for accuracy. Even if you both are attacking at the same time, use Flick. Once you’ve landed your hit on the player, and you’re about to get hit yourself, then switch to Deflect so that the incoming damage can be reduced. These two rules will ensure your odds in winning the battle.

What is ‘Odds’ Staking?

Odds Staking, also known as X-Staking, was a problem for many players who weren’t familiar with it. You can understand better with an example.

Assume that two players are staking. One has all 99’s and the other has all but Defence at 98. The 98 Defence player puts up a 9 million stake due to the lack of Defence. But the maths is entirely wrong because 1 Defence level doesn’t make a difference of 10% in the overall staked amount. It should be around 9.8 million or so.

However, that’s no longer an issue because Jagex has allowed stakes to have a 10,000 GP difference between them (plus or minus). Also, with the new update, they have introduced a tax system. So, if you’re staking between 1 GP – 10M GP, you will be taxed at 0.25%. Similarly, 10M GP – 100M GP is 0.50%, and 100M GP or higher is 1.00%. The primary purpose of the release of the tax system was to reduce the gold from the economy. Shockingly, it worked, as trillions of OSRS GP are removed on a daily basis. It helps keep a proper balance in the game. 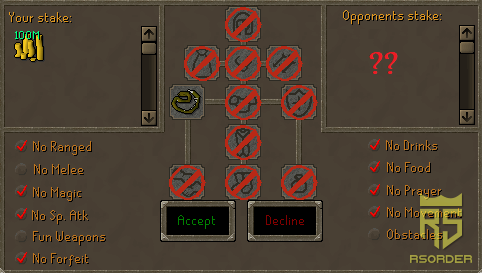 Several players try to scam other players who aren’t familiar with the system. They try to play tricks by accepting the duel with nothing in the stake interface. They basically use a middleman who holds the cash for both parties while they duel. Thus, allowing them to avoid paying any tax to the system. So, don’t fall for such things unless you’re entirely sure about the player. Honestly, not many can be trusted on an online platform.

What needs to be avoided while staking? 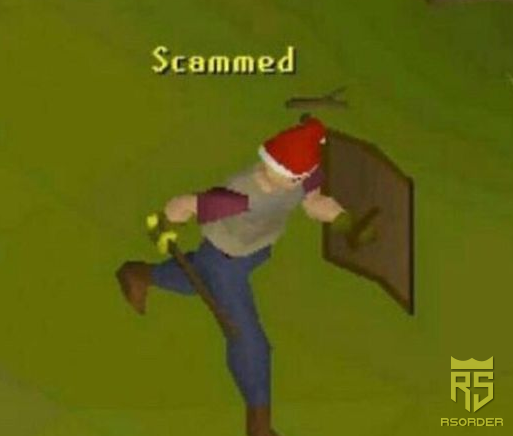 The most important element to avoid is being scammed by other players. You can do so by triple-checking what the other player has staked, alongside the rules or settings chosen in the stake interface. For instance, the opponent might leave the no weapon switch option disabled and bring a deadly weapon along with him.

Another noteworthy scam is the Maple Short bow scam. You shouldn’t engage in a take that you don’t completely understand. Your opponent may offer you a few Rune Arrows to use along with your bow, but remember that Magic Shot bow can’t fire Rune Arrows. You wouldn’t know about it until the battle begins, and that’s where the opponent brings out a beast weapon to kill you, while you stand around punching him.

If the player has Toxic Blowpipe on him, remember that even if the no weapon switch setting is disabled, they can still empty the darts in the weapon and use it to swiftly kill you.