You may already be familiar with Achievement Diaries. Well, Wilderness Diary is a part of it where tasks are particularly completed inside the Wilderness zone. Since the area is not safe and you can be attacked by players at any given time, you are recommended to bring Food, Armour and Weapons along with you for your own safety.

To complete each of these tasks, you will need the necessary set of skills. However, there are a few tasks that don’t have any real requirements to complete. The plus point is that you’re allowed to boost your skills temporarily to successfully strike the task off the list. Rewards can be claimed from the NPC named Lesser Fanatic located east of the jailhouse in Edgeville. To claim the rewards, you must first complete the previous diary tier, for instance, to claim rewards from the medium tasks, you must first complete the easy tasks. So, Let’s Begin!

Cast Low Alchemy spell at the Fountain of Rune: The area is located within the ruined fortress, just south of the Wilderness Volcano. You can use the Low Alchemy spell on any item of your choice, and you’re required to have level 21 in magic to cast it.

Pray at the Chaos Altar in level 38 Wilderness: Chaos Altar is located in the western wilderness, just west of the Lava Maze.

Enter the Chaos Rune Crafting Temple: You can find the altar in level 9 Wilderness, just north of the Edgeville Monastery. You’ll need a Chaos Tiara or Chaos Talisman if you’re using the Abyss route.

Kill a Mammoth: Mammoths are elephant-like creatures that can be found in the south-eastern part of the Ferox Enclave, which is in level 11-12 Wilderness. This enclave is a small town located southwest of the Graveyard of Shadows.

Kill an Earth Warrior beneath Edgeville: In simpler words, you have to head to the Edgeville dungeon and cross the gate that leads to the Wilderness from the underground. You can find Earth Warriors there, however, there’s a requirement to have level 15 Agility to reach them. 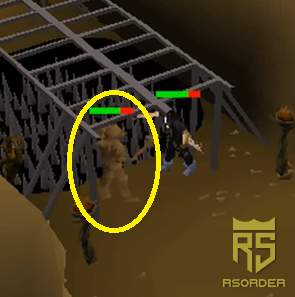 Restore your Prayer Points at the Demonic Ruins: These ruins are located within level 44-48 Wilderness. If you have access to Annakari Teleport, you can easily get there, or else you’ll have to walk your way deep.

Enter the King Black Dragon Lair: The lair is located in level 42 Wilderness, nearby the Lava Maze. Do watch out for the boss, because you may end up dead with just one breath attack. 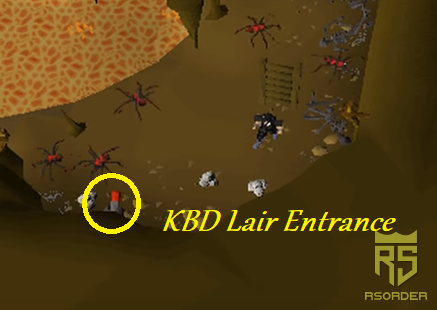 Collect 5 Red Spider’s Eggs from the Wilderness: These eggs often spawned in the Edgeville Wilderness Dungeon, and you’ll just need to collect 5 from the 6 spawn spots within it. You can find them near the Earth Warriors, and an easy trick is to drop and pick the same egg 5 times.

Mine Iron Ore in the Wilderness: You’ll need level 15 in Mining to mine Iron Ore, along with a pickaxe of any type that you can use. The area is located northwest of the Mage of Zamorak (the one who teleports you to the Rune Crafting Abyss).

Teleport to the Abyss through the Mage of Zamorak: It’s quite simple. Speak to him and ask him to teleport you to the Rune Crafting Abyss.

Equip a Team Cape of any type in the Wilderness: You can purchase any team cape from a merchant. However, if you’re entering the Wilderness with the cape already equipped, the task will not be marked as completed. You need to unequip and then equip it again while standing within the Wilderness zone. 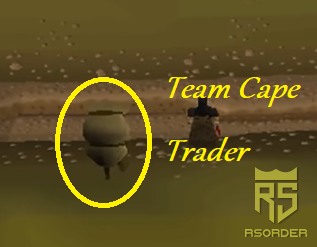 Mine Mithril Ore in the Wilderness: You can use any pickaxe to mine the ore, and a requirement of level 55 Mining is necessary. You can mine the ores in the Resource Area located east of the Deserted Keep or south of the Lava Maze. You’ll need 7,500 gold coins to enter the area, which is the toll for the gate.

Chop yew logs from an ENT: ENTS are tree monsters that can be found east from the Corporeal Beast’s lair. A rune axe or better, with a Woodcutting level of 61 is an essential requirement.

Enter the Wilderness God Wars Dungeon: A multi-combat area located east of the Forgotten Cemetery (level 28 Wilderness). You’ll either need 60 Agility or 60 Strength to get through. 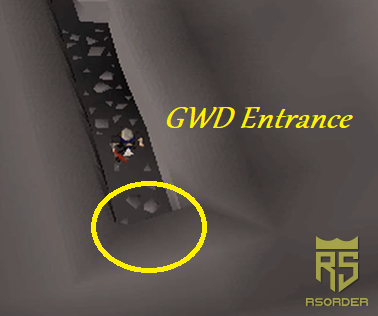 Run a lap of the Wilderness Agility Course: The course is an Agility training area that required 52 Agility to enter. It is located deep within level 50-56 Wilderness.

Kill a Green Dragon: Since it’s a dragon, an Anti-Dragon Shield is highly recommended due to its powerful fire breath. They can be found west of the Dark Warriors’ Fortress, which is between level 12-14 Wilderness.

Kill an Ankou: They can be found in both; The Forgotten Cemetery, which is a small area located in level 30 Wilderness, and Wilderness Slayer Cave, located east of Ferox Enclave or Corporeal Beast’s lair.

Change an Earth Orb: You’ll need to cast the spell Charge Earth Orb (level 60 magic) on an unpowered earth orb while standing at the Earth Obelisk. The area is located in the Edgeville Wilderness Dungeon, just south of the Black Demons where Blood Demons are found. 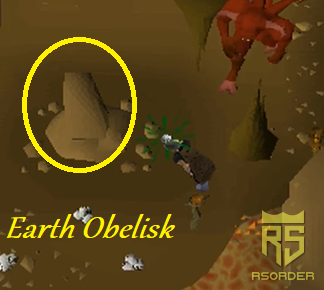 Kill a Bloodveld: You’ll need level 60 in Slayer to harm them, and you can locate them in the God Wars Dungeon, east of the Forgotten Cemetery (Level 28 Wilderness).

Talk to the Emblem Trader in Edgeville: The trader can be found wandering around north of the Edgeville Bank.

Smith a Gold Helmet: To complete this task, you’ll first need to have completed the quest ‘Between a Rock…’. The requirement to smith a Gold Helmet is 50 Smithing, alongside 7,500 gold coins to enter the Resource Area, 3 Gold Bars, and a Hammer.

Open the Muddy Chest in the Lava Maze: The area is located deep within the Wilderness (level 40-45), and to open the chest, you’ll need a Muddy Key which is often dropped by Chaos Dwarves. Aside from that, you will also need a weapon or knife to slash off the webs covering the entrance to the maze.

Charge an Air Orb: You can reach the obelisk by climbing the ladder north of the Black Demons residing in the Edgeville Dungeon. You’ll need an unpowered orb and the ability to cast a Charge Air Orb spell (level 66 Magic). 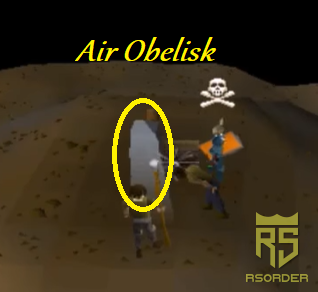 Catch a Black Salamander: You’ll need 67 Hunter, a Small Fishing Net, and a Rope to catch one. They can be found in the Boneyard Hunter Area, which is located northeast of the southern Chaos Temple, or east of the Boneyard.

Smith an Adamant Scimitar: The requirements are quite simple; you’ll need 75 Smithing, 2 Adamantite Bars, a hammer and 7,500 gold coins to enter the Resource Area east of the Deserted Keep (6,000 if you’ve completed the Medium Tasks).

Defeat a Lava Dragon and Bury its bones on the isle: Lava Dragon Isle is stretched out from level 36-42 Wilderness, and you’ll require a good weapon, along with an Anti-Dragon Shield to protect yourself from their deadly fire breath.

Kill the Chaos Elemental: You can find the Chaos Elemental wandering around the west of the Rogues’ Castle. Since it is hard to kill, many players ask for assistance but do remember that it sometimes doesn’t count as a kill if you’ve dealt less damage.

Kill a Spiritual Warrior in the God Wars Dungeon: The dungeon is located east of The Forgotten Cemetery, and you’ll need 68 Slayer to kill them.

Fish Raw Lava Eel in the Wilderness: You can find the fishing spot to fish them in the Lava Maze (Level 40-45 Wilderness). You’ll need 53 Fishing, along with items; Oily Fishing Rod, Fishing Bait, and a slash weapon or knife to get rid of the webs that block the entrance of the maze. 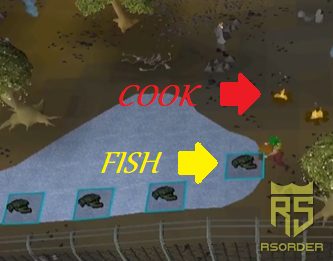 Smith a Rune Scimitar from scratch in the Resource Area: Similar to the above, you’ll need the required OSRS gold coins to pass through, along with any Pickaxe to mine, and a hammer to smith the scimitar. Requirements; 85 Mining, 90 Smithing. 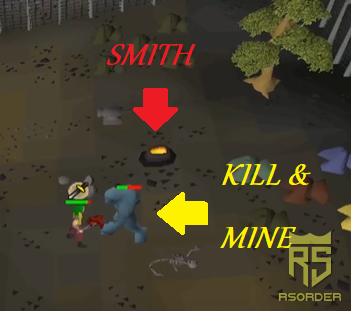 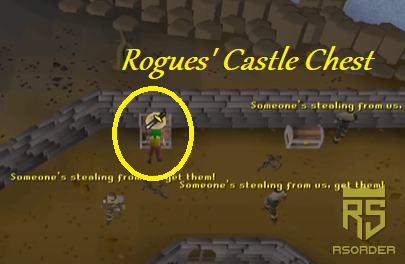 Kill a Spiritual Mage in the God Wars Dungeon: The dungeon is located east of The Forgotten Cemetery, and you’ll need 60 Agility or 60 Strength to pass through. To kill a Spiritual Mage, you are required to have 83 Slayer and good equipment to protect yourself.

Cut and burn Magic Logs in the Resource Area: Similar to the above, you’ll need the required gold coins to enter the area, along with any Woodcutting Axe, and a Tinderbox to burn the logs. Requirement; 75 Woodcutting and 75 Fire Making.