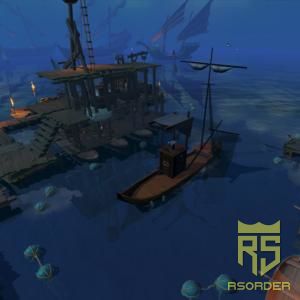 Players who want to optimize their RuneScape accounts should consider the importance and role of Dailies. Daily Activities like Vis Wax are a great and reliable source of income for players; however, the activities are beneficial for both; main and Ironman accounts is the Travelling Merchant.

Traveling Merchant stocks four items daily for players to purchase. The first slot is always fixated as the Uncharted Island Map, which has its own uses and offers a minor chance of obtaining the Tavia’s Fishing Rod (an item worth billions), from the RuneScape . The rest of the three slots change on a daily basis, and the best way to figure out the upcoming and current stock is through the official wiki.

The Travelling Merchant is located at the Deep-Sea Fishing Hub, which can be accessed by speaking to Goomah, who can be found in the Fishing Guild that is north of Ardougne. Alternatively, you can attune a Grace of the Elves Amulet to reach directly at the Hub. You will need a fishing level of 68 to access it, and you can grab a bite of the Admiral Pie to temporarily boost your stats.

The only drawback is that the Travelling Merchant only spawns on certain worlds and at specific times. It can take a while to locate the RuneScape merchant, so it’s best to use the RuneScape community as a means to locate him. For instance, you can join the Friend’s Chat for help, which can be done by opening the Community Tab interface and clicking Social. Alternatively, there’s a Deep-Sea Fishing Discord channel that you can join to know where the Travelling Merchant has spawned.

D&D is known as Distraction and Diversion, which primarily centers around a number of activities that can only be completed at times. Some of the D&Ds are done daily, such as Goebie Supply Runs, while others are done on a monthly basis, such as the Giant Oyster. They are a great source to progress ahead in the game without investing much time and money.

D&D Tokens allow you to have a Distraction and Diversion of choice that can be reset at will. For instance, a weekly D&D Token enables you to complete the limited Rush of Blood Slayer D&D twice in one week. The best use of it would be on Big Chinchompas, Guthixian Cache, Penguin Hide & Seek, Giant Oyster, Tears of Guthix, Effigy Incubator, Sinkholes, and Herby Werby.

Regardless of whatever stage or level you’re currently at, purchasing Dragonkin Lamps from the Travelling Merchant is always worth it. It’s an EXP lamp that costs about 250,000 GP, and there are no real requirements to use it. However, the awarded EXP is based on the skill level that you’re currently at, which means if you’re at level 99, you will be granted 48,000 EXP, and if you’re at level 60, you’ll be granted 10,740 EXP.

The reason why Dragonkin Lamps are appealing is that it’s the only way to unlock one of the most prestigious pets on RuneScape. Every time you redeem a Dragonkin Lamp, there’s a 1/100 chance to obtain the Effy Pet, but before that, you must complete the mini-quest called ‘Rebuilding Edgeville.’

Gift of the Reaper

These points are available for just 1.25M GP from the Travelling Merchant store. You can simply click the purchase button for an effective and instant profit of 3M GP. In terms of Ironman accounts, you can purchase and redeem the item for points, as it has many uses for end-game content, such as Reaper Necklace, Ring of Death, Amulet of Souls. All these items require an Incomplete Hydrix.

Harmonic Dust isn’t important for the progression in the game, but it’s still worth purchasing from the merchant. The item is used to create Crystal tools, such as Crystal Hatchet, Crystal Mattock, and Crystal Pickaxe.

You can also farm Harmonic Dust by playing the harps located in the Ithell District (Prifddinas); however, it takes too long, so most players prefer purchasing it from the merchant itself.

These coupons are consumable items that are important for high-level Slayer. When a Slayer task is received, you will have the ability to select a second alternative with the help of these Coupons. In simpler words, it doubles the chances of getting a good Slayer task. Each Slayer VIP Coupon offers 1 to 7 Slayer task re-roll chances.

They also stack with the passive effect of the Slayer Master Cape. The effect grants a 20% chance of selecting a task of your choice.

Unstable Air Rune grants 5,000 Runespan points, which is known as a low-intensity means to train your Rune Crafting skill. When you earn the points from either redeeming an Unstable Air Rune or training within Runespan, you unlock various items, such as the Master Rune Crafter Outfit and Unstable Essence.

Known as one of the most tedious and slowest skills in the game, it’s important to make the most out of it by purchasing an Unstable Air Rune from the Travelling Merchant for 250,000 Runescape GP. The outfit and essence, both help speed up the process of training.