Magic is quite important on the OSRS platform. It unlocks many combat & utility skills as you advance in levels. Teleportation, Converting Items to OSRS Gold Coins, Powerful Attack Spells, etc.

But the real question that arises is what weapon should a skilled mage utilize? In Old School RuneScape there are several options to choose from, and some of them are so powerful that only the best of best can wield them. In the following guide, we will be listing the top ten Magic weapons available to OSRS players.

The first staff is a popular Barrows item called the Ahrim’s Staff. It required you to have at least 70 Magic and Attack to wield the item. It offers a Magic attack & defense bonus of +15, along with a Magic strength bonus of +5%.

You can unlock the Ahrim’s set effect by wielding the staff with it. The effect allows you to lower your enemy’s strength level upon every landing hit. You can also pair it with an Amulet of Damned to auto-cast Ancient Magic spells, which grants a 25% additional chance to inflict 30% more damage. You can obtain the item from the Barrows minigame.

The Staff of the Dead

This staff is for dual purposes, as it also acts as a decent Melee weapon. The stats are similar to that of the Dragon Longsword, making it stand out from the other Magic weapons on the list. You need 75 Magic and Attack to wield the Staff of the Dead.

It offers a +17 Magic attack & defense bonus, along with a power Magic strength bonus of +15%. When you use a combat spell with this staff, there’s a 12.5% chance to prevent the use of runes. Besides that, it has a powerful special attack that breaks down the incoming melee damage to half for a duration of sixty seconds. You can obtain the staff in the form of a drop from K’ril in the GWD (God Wars Dungeon).

Also known as the second most powerful staff in the game, the Dawnbringer can only be used in one place, which is the phase 1 Verzil segment in the Theatre of Blood raid.

It offers a +25 Magic attack bonus, along with a special attack that damages Verzik for 75 to 150 life points every hit. You can only obtain the item within the Theatre of Blood raid (temporarily), and it cannot be brought outside.

The first wand on the list is Master Wand which offers a Magic attack & defense bonus of +20 to its wielder, and you are required to have level 60 in Magic to wield it. There are only a few items in the game that allows you to auto-cast Ancient Magic, and one of them is Master Wand.

The only drawback is that you have to obtain it through the Mage Training Area, which is probably the most tedious and boring task. You can purchase it through the points earned by completing various activities.

Tied with the Mater Wand in terms of statistics, the 3rd Age Wand can auto-cast normal Magic spells. You are required to have level 65 in Magic to wield it. The item is quite rare in the game, and it costs about 140M GP.

Players generally purchase this wand to show off its looks, rather than utilizing it in combat scenarios. You can only obtain the 3rd Age Wand from either Elite or Master Clue Caskets.

Trident of the Swamp

The most used staff in the game would probably be the Trident of the Swamp; however, it is pretty expensive. You can only wield the staff with level 75 in Magic. It offers a Magic attack bonus of +25 and a Magic defense bonus of +15.

It’s currently banned in PVP, so you can only use its effect in PVM. Lastly, it offers an incredible chance of 25% to envenom your foe. The percentage increases to 100% with Serpentine Helm equipped. You can obtain it by attaching a Magic Fang from Zulrah, on a Trident of the Seas staff.

Toxic Staff of the Dead

Toxic Staff of the Dead is an upgraded version of the Staff of the Dead, as it has a Magic Fang attached on top of it, for osrs gear. You need 75 Attack and Magic to wield it, and its statistics are identical to the normal version, but with additional benefits of envenoming your enemy.

You can increase the chance of envenoming to 100% with Serpentine Helm equipped. The staff is mostly used in PVP scenarios due to the high output damage that it offers with Surge spells. You need to charge the staff with Zulrah Scales, which costs about 1.3M to fully charge it.

Being a powerful staff, you need 75 Magic and 50 HP to be eligible enough to wield it. Known to be the most expensive Magic weapon on the list (840M), the Harmonized Nightmare Staff is quite useful in PVP scenarios, for osrs gear. It’s a 4-tick weapon with no delays, making it also one of the quickest weapons in terms of damaging.

You can activate its special attack with offensive spells from the normal spell book. Besides speed, the staff offers a Magic attack bonus of +16 and a Magic strength bonus of +15% to its wielder. You can also use it against PVM bosses like Kraken, the Nightmare, and Zulrah. The staff can be obtained by combining a Harmonized Orb with the Nightmare Staff. 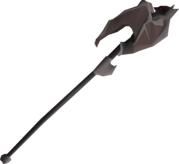 Being a popular choice among the skilled Mages of OSRS, the Sanguinesti Staff offers a +25 Magic attack bonus and a +15 Magic defense bonus to its wielder. It also has a power passive effect, where there’s a 1 in 6 chance of healing yourself after a successful hit on the enemy.

The Sang has a built-in functional spell, and it must be charged with Blood Runes, so it’s quite expensive to maintain. You need 20,000 Blood Runes to fully charge the staff, which costs about 22.6M GP. The Staff is mainly utilized by rich players, and it can be obtained in the form of a drop within the Theatre of Blood raid.

There’s no doubt that the number one spot goes to the Kodai Wand, for osrs best Mage gear. It’s known as the best Magic weapon in OSRS, offering a Magic attack bonus of +28, Magic defense bonus of +20, and a Magic strength bonus of +15%. You are required to have 75 Magic to wield this item.

A plus point is that you can auto-cast both, normal and Ancient Magic spells. The Kodai Wand also provides an unlimited supply of Water Runes to its user, which means casting Ice spells becomes fairly easy, and you also save inventory space, for osrs best Mage gear.

The cost of the wand is approx. 86M OSRS GP, but it’s worth every penny. You can obtain the wand by combining a Kodai Insignia (Chambers of Xeric raid) with a Master Wand.